While drones may no longer be considered “the big, new thing,” the devices continue to push the boundaries of their market. Where once they were little more than toys that made easy work for YouTube video compilation producers, today drones have segmented their presence into numerous niche markets.

To fully appreciate what one drone provides, you need to understand which specific market that drone is designed to target. A survey drone will be built very differently than a casual flying drone, while a racing drone will be built far different than either of them. With that in mind, let us take a look at Mei Jia Xin’s newest model in our MJX Bugs 6 Drone Review.

The MJX B6 is best understood as an entry level FPV racing drone. However, you should not necessarily let that “entry level” moniker scare you away as the product itself is far superior to what often passes for “entry level” in the larger drone market.

For some drone niches, this is not that big of a deal. For instance, unless flying in heavy woods or in a windy area, a surveyor drone does not need to be the best that money can buy. This same principle does not apply to racing drones though.

By virtue of the niche’s specifications, racing drones can be neither cheaply made nor poor performing, otherwise they fail to satisfy even the most basic demands--a consideration that applies doubly so for a FPV raci﻿﻿ng drone. Thankfully, Mei Jia Xin is well aware of the needs required to properly race a drone and their B6 model is a perfectly designed RTF, or ready-to-fly, model. 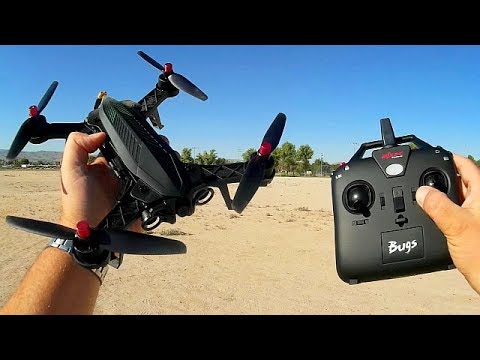 The different features of a drone can be broken down into mechanical, electronic, and locomotive factors. All three should be treated as equal priority since the ability to race the B6 is contingent all three--something that does not necessarily apply to every niche of drone.​

The mechanical factors relate to the motor, propellers, and any other moving parts. While this consideration will definitely weigh heavily on the locomotive capabilities of the B6, it also informs the durability of the drone more than the others categories.

This drone lives up to it's name and has the "bug" look. The bugs 6 has sleek low profile design, typically seen on other racing drones. The bugs was designed for beginner who is just looking to get into FPV and not ready to drop serious cash on a racing drone just yet.

Despite its arbitrary number designation, the MJX B6 is a quadcopter--not a six or eight propellered drone. Of course, four rotors is the racing standard so this should be expected. Still, it is important to note that as a four rotor racing drone, some measure of absolute hovering stability is sacrificed--something that flyers or 6 or more rotors will immediately recognize.​

The motor of the B6 is an 1806 1600KV brushless motor. This presents a number of qualities that limits it in some ways but provides numerous advantages as well. The number indicates that the motor is 18 mm in diameter and 6 mm high. The 1800 KV, however, should not be taken as pure indication of power. Instead, it represents the revolutions per volt of the motor.​ For more information on what the numbering on the drone motors mean have a look here.

Oddly enough, this motor is not truly ideal for the drone itself. The 1806 sized motor is better served for a drone that uses 4” propellers due to a lower RPM speed. Moreover, the 1800KV ratio places this drone squarely outside of the truly competitive racing environment. The recommended KV for an 1806 motor is between 2600 to 2800.

Ultimately, this means that the B6 will simply not be able to keep up with other drones that can fly in excess of 100 mph. However, there is a positive to the lower KV which is that its torque is much higher. The increased torque does provide a significant amount of control which allows flyers to run complex obstacle courses far more effectively. Essentially, any course that requires rapid changes of direction and especially altitude will be fairly well served by the B6’s motor.

Another reason to prefer a brushless motor has to do with its efficiency. In fact, brushless motors can be more than twenty percent efficient than brushed motors--though the more common degree of increased efficiency generally hovers around ten percent. Still, this has important implications for the drones functioning.

A more efficient motor has obvious benefits in terms of battery life. Where most batteries for racing drones often have run time of little more than five minutes, the B6 runs more than twice that. However, the more meaningful impact of the brushless motor is the fact that it takes less energy to power the rotors. Unfortunately, this does not provide more maximum power, but it is partly responsible for the additional torque.

One of the best qualities of the B6 drone comes from its display capabilities. This is one of the few, if only, drones at this price point which provide the full suite of peripherals necessary to get you in the FPV arena without having to make additional purposes. These items include the display monitor, FPV goggles, and a camera.

The camera itself is decent with a maximum video resolution of 720p but a maximum image resolution of 1080. Sadly, there is no 4k resolution option with the B6 without aftermarket modifications, so you should not use the B6 as a surveyor drone.

The monitor display is 4.3” LCD screen that produces a sharp, clear image free from artifacts. Moreover, the goggles are designed to use the included display monitor by simply sliding in and snapping down. Keep in mind, to record any video with the B6, you will need a class 10 MicroSD.

This is one of the areas where the B6 shines. Keep in mind, for an entry level FPV racing drone, the B6 is already a breath of fresh air in an otherwise stale market. However, for a product that already costs nearly half as much as its competitors, consumers would likely forgive the B6 if its flight performance was merely average.

However, the B6 is actually surprisingly agile for a drone within its price range. Of course, agility is not the only measure of a racing drone’s flight performance. Another major factor is top speed--especially considering the inherent purpose of a race is to go the fastest.

It is here that the B6 will show value in some racing events and not others. With a maximum speed of 31 mph, the B6 is not going to win any drag races. However, its agility will make it predisposed for a solid performance during time trials or other types of heat races.

Specifically, the 6-axis control allows you to maneuver the B6 like a hot knife through butter. Granted, there are still far more agile flying drones once you invest hundreds to over a thousand dollars. But for this price point, the B6 is a surprisingly smooth flyer.

While the MJX Bugs 6 quadcopter does so many things right for an entry-level RTF FPV drone racer, one of its major flaws comes in the form of customization. Keep in mind, we are not suggesting that the B6 is without custom options, but they are fairly limited and almost exclusively proprietary.

What this ultimately means is that the B6, sadly, has limited ability to evolve past its initial starting point. Unlike some of the other professional racing drone manufacturers, the MJX does not always use the “industry standard” construction parameters. Sure the more experienced guys will no problems modding this thing and tinkering, but a newbie most likely won't be doing that anytime soon.

What this means in the real world is that when you have mastered pushing the B6 to its limit in terms of flight capabilities, you will be forced to rely on MJX component upgrades for many parts. While MJX is certainly no slouch in this department for casual users, they do not truly provide professional components--like carbon fiber parts--that will provide the edge needed to race in the top, professional tournaments.

While MJX has taken the budget drone market by storm, the company is constantly seeking to push their product capabilities further and further--a philosophy not always seen with budget market products. However, there are only so many ways that a high-tech product can innovate and improve before the cost of manufacture forces a retail price that places it squarely out of the budget market.​

In that vein, consumers should expect the Bugs 2 and the Bugs 6 to be fairly similar in regards to many of the qualities that determine how the drones fly. In fact, the newer Bugs 2 actually differentiates itself from the Bugs 6 in auxiliary features more than flying performance. Of course, that is not to say that there are no differences between the two in how they fly, simply that you will likely notice the most marked improvements in non-mechanical features.

For instance, both the Bugs 2 and Bugs 6 use 1806 1800 KV motors. However, the Bugs 2 does hold a distinct advantage by  being able to use both a two and a three cell battery. This seemingly slight difference allows the Bugs 2 to provide more consistent power throughout various flying maneuvers. Though, it should be noted that, unlike the Bugs 6, the Bugs 2 is not intended to be used as a racing drone.

This is most readily apparent with the dimension decisions made for the Bugs 2 compared to the Bugs 6. The B6 is a much smaller drone all around. While both drones run similarly along the diagonal length of 250 mm--the standard size for most racing leagues--the B2 is actually 5 mm longer.

However, it is the general chassis’ dimensions which provide a far more pronounced difference. In terms of height alone, the B2 is almost twice the size of the B6 at 75 mm for the B2 compared to only 41 mm with the B6. Moreover, the horizontal dimensions are similarly oversized for the B2 coming in at 255 mm again whereas the B6 is much slimmer at only 180 mm.

What this ultimately translates to is a heavier drone--something that becomes a problem if you intend to race the machine. In fact, the stock B2 is almost twenty percent heavier than the B6 with the former weighing in at 445 grams while the latter is a much lighter 375 grams. However, this size difference should merely inform you as to the true purpose of the Bugs 2.

The MJX Bugs 6 quadcopter is not for everyone. If you have extended experience with high-performance racing drones, you are likely to find the lack of speed with the B6 a bit underwhelming. However, even seasoned veterans can appreciate the B6’s agility.

Similarly, those seeking to take spectacular videos will also likely prefer to look elsewhere. While the B6 is more than capable of producing an adequate image and okay video, it will not blow anyone away with its cinematic capabilities and certainly cannot keep up with the competition of 4K recording.

If you are new to drone racing and looking for good entry level FPV racing drone this is good choice to learn the ropes before investing a ton of cash, just to find out drone racing is not for you.

If line of sight flying is more your thing, you may want have a look at the "fun to fly" MJX Bugs 3!