Although MJX Bugs 4W sounds like it would be the name brand of an ATV or UTV, it is actually the brand name, make, and model of a fun and special drone copter. Drones have been entertaining toys and even useful business accessories for the better part of the last decade. They continue to be interesting and fun, and this particular type of drone copter is no exception.

However, if you are new to the world of remote control drones, and drone copters, you might be a little confused about all of the different types available, as well as the jargon used to discuss and describe these toys. Reading informative articles, such as the one that follows, will help familiarize you with the world of drones, and more specifically, with the MJX Bugs 4W model. Then you can choose a drone or drone copter to start with to see if this hobby is right for you. 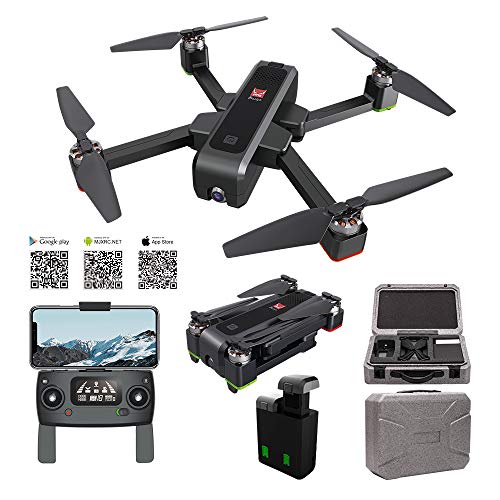 MJX stands for part of the company's name, "Meijiaxin." It is shortened to MJX for English-speaking consumers. The company is based in Shantou, of the Guangdong province of China. Here, technology has been a focus of many products coming out of China for decades. Because technology is the main focus, the MJX company is able to make better, faster, lighter, and more advanced products than most anything you can find in the United States.

The MJX Bug 4W drone copter is an excellent example of this advanced technology. Even though it is meant to be for hobbyists and drone enthusiasts, it has enough advanced technology built into it that it could be a lot more than just a toy. It contains a number of features that seem so far advanced for such a simple remote control drone.

For one, the "4W" designation means that it has "4 wings," although these wings are actually helicopter bars with copter propellers mounted to the tops of the wing bars. The 4W designation also stands for the model, since several models came before it, and there are a few updates since. The bars fold in on a rectangular body, which houses a state-of-the-art camera, WiFi computer chip, lithium ion rechargeable batteries to keep the copter lightweight and in the air longer while reducing battery waste, and a weather-proof casing so that you can fly it in almost any kind of weather.


The tech gear does not stop there! There are also red and green LED lights on the underside of the drone so that it can be flown and night and recovered with little difficulty. The brushless motor can lift the drone, and up to 230g, or a little over a half-pound, straight into the air with very little effort and little noise. It is essentially a stealth camera in the skies.

You can use the LCD screen on the controller to see where the drone is going, or you can use your smartphone and an accompanying app. A lot of owners love the app and smartphone option because you can get some really great aerial views and shots where you fly the drone. The app and phone option also gives you greater control over seeing how high and how far you need to lift and move the drone to avoid rocky outcroppings and trees.

The MJX Bug 4W Isn't for Everyone

As cool as this drone copter is, it isn't for everyone. For starters, the price is not something you want to spend on a toy for a five- or six-year-old. Fourteen and up would be advisable for a drone coming in close to 300 dollars. It takes some skill to learn how to maneuver it, and its more advanced features should only be engaged by a responsible, law-abiding adult. (You will see later on what we mean by this.)

The ideal owner is a search and rescue team member who can use the drone's many amazing features to help find lost and injured persons or pets who may be trapped in crevasses in mountains or tunnels. An advanced drone hobbyist is also an ideal owner (i.e., someone who has flown a lot of different drones and drone copters and has enough experience and knowledge about them to really enjoy the MJX Bug 4W.) It is not the drone or drone copter for the "newbie."

If You Buy One Anyway, This Is What You Get in the Box 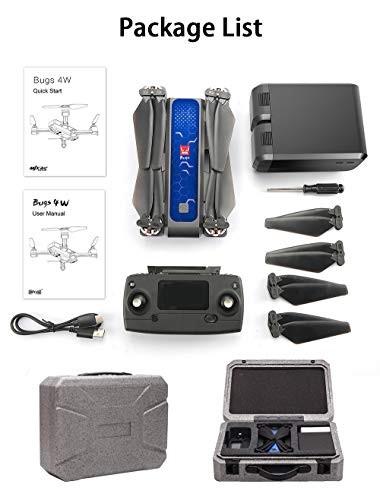 Anyone who decides to buy a MJX Bug 4W should know what they are getting. The copter drone comes compact, with its wing bars folded in towards the body. You will need to fold these out before you attempt to fly it for the first time.

There are two slide-out chambers for the lithium ion battery packs. You will need to install these yourself, as it is safer to ship the batteries outside of the drone. The chambers will click shut when pushed in all the way. Test the drone's lights to make sure the batteries have been installed correctly.

The drone, as well as its controller with the LCD screen, come in a carrying case. There is also a charging cord to recharge the batteries. The instructions in the box will tell you how and when to properly recharge your "Bug" when the time is right. A limited amount of power is available right out of the box so that you can test the copter to see how it works.

Any extras and accessories that you may want to add to the copter are sold separately. We recommend that you try the copter first, and check out all its features before you add things to it. If you are going to use it for commercial purposes, you should still test-run it before adding to it. 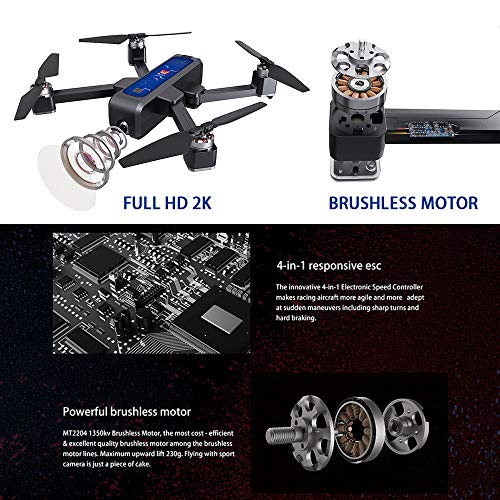 Some of the great features of this drone are mentioned above, but we saved the best for last. To really appreciate these features, we wanted you to get a comparative feel for the technology that goes into creating them inside this little drone copter.

Range :Usually, this drone copter can fly about 300 meters, or about 984 feet. If you can keep up with the speed of the drone, it may fly farther, but then you would be racing over the same distance that the drone flies.

Flight Time :Depending on the air and weather conditions, the 4W will fly anywhere from twenty to thirty minutes. When the batteries start running low, the signal between the drone and your controller will be a buzz or a ringing that tells you that you should take the drone down out of the air and set it up to recharge.

Video Quality :The 2K camera does a decent job to give you a view of the ground below the drone, but things tend to get a little fuzzy if the drone is moving too fast or going very high. You will be able to see most things below and in front of the drone so long as it is moving slow or closer to the camera.

Photo Quality :"Stills" come from some of the video footage the camera takes. If you hover over a particular area and you want a "still" shot of that area, there are controls that will let you take a snapshot. The snapshot is then saved to a media card, which is typically sold as an accessory and does not regularly come standard with the drone's kit. The photos are best during daylight hours, and you will not get many clear or decent shots at night.

Size :When folded up, the MJX Bug 4W fits into the palm of your hand. It looks like an old school video camera with four whirly-gigs on its corners. You could easily place it in a large jacket pocket if you forget to bring the carrying case.

Weight :It weighs about 1.4 pounds. The motors are able to lift the drone's own weight, plus another half pound or so. If you combine copters, you could use them for commercial use to carry objects that are a couple of pounds or less.

Stabilization :The copter is fairly stable. There are times when the camera will reveal some shakiness as the result of high winds.

"Track Me" :This feature is one that people really like. It is generally used for fitness training and to record people running, biking, swimming, or working out outside. You set the camera's tracking feature ahead of time to focus on one object, namely the person working out. Then you use the drone to follow that person.

You will have to follow some distance behind to keep up if the object is moving farther away from you than a thousand feet, but it is still a fun feature to use.

A Visual Idea on How the MJX Bug 4W Operates

The MJX Bugs 5W is the upgrade of the 4W. Besides the higher price, the 5W has a better camera, much better stabilization of said camera and the copter itself in the air, and longer battery life. Most of the rest of the features have remained the same. If you are not adamant about having a 4K camera versus a 2K camera, and you do not think you'll be playing with this drone much, then the 4W is more than adequate. Most MJX Bugs 4W reviews will tell you the same thing.

Flying any drone is a learning curve. You have to get the feel for the controls and the way the drone moves. Here are a few tips and tricks to get you started.

--First few flights you should be flying in areas with few power lines and trees. It will prevent accidental damage to your drone until you get the hang of it.

--Don't fly the drone near cellphone towers. You might think that it will help enhance the WiFi signals, but it won't. It just interferes with the signals instead.

--DON'T use the drone to spy on people, take their pictures or video without their express permission! It is called voyeurism, and it is illegal.

--Until you feel comfortable with the controls and learning to turn, pivot, and steer the drone around specific objects, do not fly it too fast.

--You can fly it in the house, but you will need high ceilings and you have to avoid crashing it into walls and people! The propellers can get knotted up in hair, so do not fly it near people

Check out more about the MJX Bugs 4W on Amazon!!