Drones have taken the world by storm – statistics show that there will be almost 7 million drones in the USA by 2020. Are you looking to get into this growing craze? Are you wanting a drone that won't break the bank but can also give you the 'drone experience'? Then the MJX Bugs 3 Mini Drone review might just be for you! This is a shrunk down model of the full size MJX bugs 3 that absolutely rocks! Read on for our review. 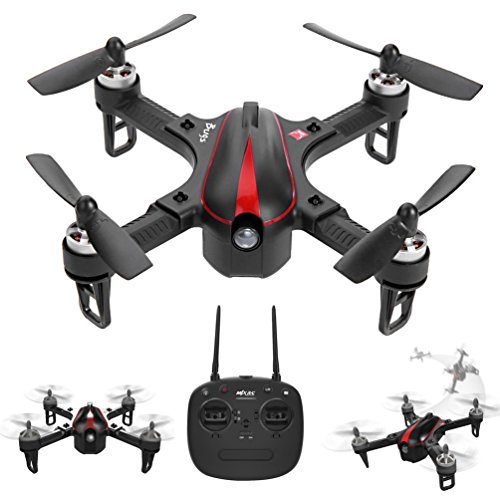 The Bugs 3 Mini Drone by MJX, a mostly toy grade drone Chinese manufacturer was released in early 2018, and is intended to compete in the entry level drone market. This is the latest model in the series.

Who is the Bugs 3 Mini Drone for?

As stated above, the Bugs 3 Mini drone is designed as an entry level drone – it is aimed at those people with little to no drone experience, and is designed to be an easy to control drone without having to worry about complicated smartphone apps or other confusing peripherals.

The Bugs 3 Mini is also designed to be a very inexpensive drone. This price is at a much more manageable range than other drones on the market, which can range from the $349 all the way up to $5000! As such, it is priced perfectly for those who want to test out flying a drone without breaking the bank.

What's included in the box

Packaging is an important aspect of the drone experience, and the Bugs 3 doesn't disappoint in this area. When you purchase the Bugs 3, it comes with the following items/accessories:

As you can see, there are plenty of accessories included with the drone, including spare propeller blades and tools to help attach the mounts and assemble the drone. However, there is one big omission from this drone – there is no camera included. Many drones in the market include some form of camera, and one of the great joys of using a drone is to capture stunning aerial footage of your surroundings and adventures. For some people, the fact that the Bugs 3 drone does not include a camera may be a deal breaker. However, the Bugs 3 does come with a camera mount which you can use to attach an existing camera or action camera (such as a GoPro) to the drone.

Additionally, it is important to note that the Bugs 3 drone comes with only one battery out of the box. This is becoming a common trend, even among more expensive drones. If you are wanting extra flight time without having to recharge, you may wish to consider purchasing extra batteries.

If you want to see an unboxing experience which shows the contents of the box in detail, check out this unboxing on YouTube.

Once you have unboxed your new drone, set up is a breeze – users have reported that all you need to do to get flying is unbox the drone, charge the batteries, sync the transmitter to the drone and you are good to go. For the casual user, the quick set up and installation process is a plus.

The Bugs 3 drone has a number of features and specs which help make it a powerful drone. Here are some of the best ones:

This MJX mini drone is built from plastic and carbon fiber. While relatively sturdy, the drone is larger than other compact drones in the market (such as the DJI Spark or the DJI Mavic). That being said, users have reported that the drone can withstand falls and other bumps and bruises with little to no damage to the chassis.

The Bugs 3 features a 'brushless motor' which helps it to fly. These motors are a new generation of drone motors which have been specifically designed to be reliable and have less moving parts, which decreases the chance that the motors break down during flight. In addition, the Bugs 3 features a best in class motor which is very power efficient (which leads to great battery life).

One of the most important features of drones is the battery size and the associated flight time. Back when drones were in their infancy, even the highest end drones only boasted a few minutes. Nowadays, thanks to power efficient motors and ever increasing battery capacities, we are seeing longer and longer flight times.

The Bugs 3 is one of those drones which does not disappoint in battery stamina. The 1800 mAh rechargeable battery is rated for up to 20 minutes of flight time with moderate speed settings, and even longer if you are conservative with flying. This stamina is similar to what you would see even in more expensive drones in higher price brackets.

The charging time is rated at 2 hours from 0 – 100% charge. This is somewhat on the higher side considering the size of the battery, and could be a reason why an extra battery might be a good idea to have in your bag.

The Bugs 3 communicates with the included transmitter using the 2.4Ghz wireless radio frequency (that's similar to the radios used in WiFi routers, except stronger). This wireless radio technology is popular in entry level drones. This means that the effective range of the drone is up to 1600 feet before you start losing signal.

This range is relatively decent for entry-level drones, but if you are looking for ranges beyond that you will have to start looking into the extended range drones with GPS built in for precise flights – however these come at the expense of a higher starting price.

Even though the Bugs 3 drone has a range of 1600 feet, it is always recommended to fly the drone while keeping it in sight – so you avoid any potential accidents.

The Bugs 3 drone also features a number of features in flight which assist in the smooth control and operation of the drone. Here are a few of them below:

The drone comes with an intelligent flight chip on board which assists with automatic lock protection and high temperature lock protection. These features help protect against the drone from locking up or seizing which can lead to drone failure.

The Bugs 3 also features a six-axis gyroscope, which is good for providing a stable flight even in windy environments. It also helps with stability in photography and video recording. This gyroscope enables other features such as one touch '3D flips' and other acrobatic functions.

A bright white LED light is installed on the nose of the drone and is useful for making you and other people aware of its location during flight.

As previously mentioned, this drone does not include an inbuilt camera – instead, it includes a camera mount which the manufacturer claims is compatible with both the GoPro and Xiaomi series of action cameras.

MJX also offers two optional photography accessories for the Bugs 3 – the C4000 HD Sport Camera and the C4022 panoramic camera. These cameras can be remotely controlled from the transmitter.

Sample footage from the C4000 camera is available on YouTube. From the sample footage, the video is relatively stable and smooth, even in windy conditions.

While the Bugs 3 has plenty of features for the price, there are a few features which are missing from the overall package which can affect the drone experience. These include:

For some great tips and tricks on how to set up the Bugs 3, check out the following unboxing/set up and flight videos: 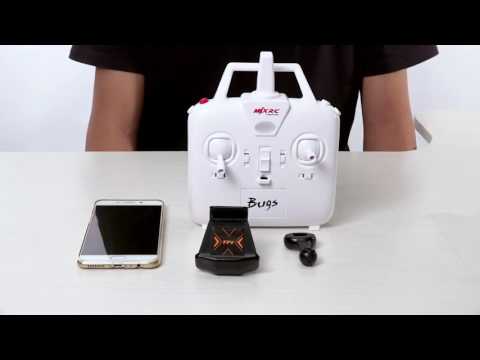 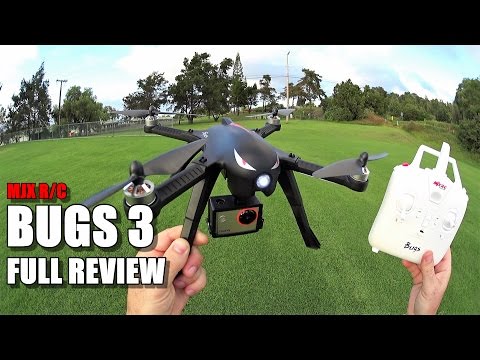 The entry level drone market is one of the most saturated, with dozens of brands and drones vying for your purchase. That being said, there are a few alternatives to the Bugs 3 which you may wish to look at:

The U28W Mini Camera Drone comes at a lower price of $80, and includes a camera built in to the drone and control via a controller or a smartphone. However, there are several features which the Bugs 3 has that the U28W does not, including: A lower range (160 feet v 1600 feet), and a smaller battery (500 mAh v 1800 mAh).

The MJX Bugs 3 Mini Drone is an awesome drone for beginners looking to start their drone hobby. Priced well below $200, it is a great drone for those wanting simplicity and straightforward features from their drone.

Those looking for aerial photography might be a little disappointed by the lack of an onboard camera, but there are some optional accessories which more than make up for this.

The motor design is also a great bonus – leading to a more power efficient, reliable flight.