My son, who is three, often asks me if he can help me fly my drones. Unfortunately, he’s not quite old enough to take over the controls himself. He can place his hands on the controller with my help for a short time, but that is about it. While there are many drones for kids on the market, not many cater to children his age. Little Tikes has stepped in to try to fill this niche in the market. 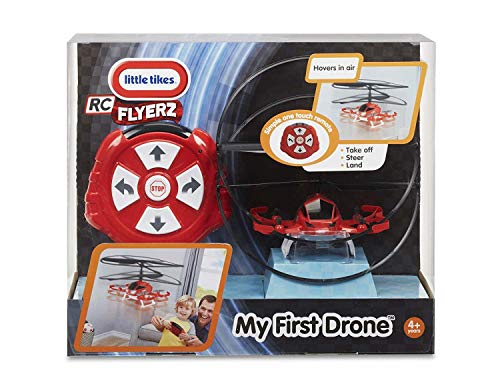 When I first saw the “Little Tykes My First Drone” on amazon, I thought this little drone would be a great way to get into the hobby and build some hand and eye coordination. I read some reviews and saw that there were many bad reviews on amazon for the drone.  Many reviewers stated the drone had already stopped working after one flight.

I decided to go ahead and order anyway to give it a shot, plus amazon has a 3-year accident protection plan for less than 10 bucks. I would have been leery about purchasing, had it not been for the protection plan. I highly recommend you purchase the protection if you buy this drone, since it will likely take a beating.

The first thing you will notice is that the design is more in line with a helicopter rather than a drone. It has two main props that do most of the heavy lifting and four smaller props that seem more for show but do spin.

There are two prop guards to protect the drone during crashes, however they are very flimsy and I am not sure that they provide much protection if any. The device does have a fragile feel to it, but it has held up fine so far.

The drone also has led lights and the drone makes sounds when you start it up for added effects.

The controller is intentionally very basic, with just and up, down, left, right and a stop button. I taught my son to use the stop button if it looked like he was going to crash the drone. He seemed to catch on to this concept quickly which helped to avoid many crashes and damage to the drone. The controller takes 6 “AA” batteries.

The drone charges from a cable that is attached to the remote. It takes about 45 minutes or so to charge completely. The led lights up green when charging and will turn off when charging is done. We only saw about 3-5 minutes of battery life on a full charge.

Flying the drone is simple.

Press the up arrow on the controller and the drone lifts off the ground. From there the controls are limited and there is about a second of delay before the drone responds to the command.  Pressing the down button twice will land the drone. If the drone crashes, hitting the stop button will limit any damage that might occur to the props or drone itself.

The best feature about this drone is that it will auto-hover by itself, similar to altitude hold on higher end drones. This feature made it much easier for my son to fly the drone. The drone can go left to right and up and down. This is a limitation of the drone, but at the same time, simplifies the flying experience for younger children. The stop button is useful for crashes or performing an emergency landing.

So far, my son has had about 8 flights or so and the drone is still going strong, despite many crashes. I am not sure how long the drone will last, but I am not too worried since we have the protection plan. The true test will be if the drone can survive his little sister getting a hold of it.

There really are not a lot of drone options for children in this age range, so it’s good that Little Tykes has brought a product to the market to fill this void.

We do wish the range was better and the flight time could be better. I only recommend this drone if you’re ok paying extra for the protection plan. I will provide any updates if we run into any issues with the drone.

If you know of any good alternatives to My First Drone by Little Tykes, let us know in the comments. We would be happy to test them out.

Very good review of my first drone by little tikes- thank you for all your help & hard work!