Revealed and released back in 2015, the powerful yet affordable Hubsan H109S X4 Pro drone has gained a lot of attention from many drone enthusiasts and hobbyists alike. The H109S X4 comes in two versions which are the standard and the High Edition, although there's little difference in between the two.

The standard H109S has a similar build to the H502S and is designed to be a slim FPV explorer drone because of its long flight range and powerful battery. It's a rather nice step up from the H502S and is equipped with many useful features that may come in handy when you're capturing your travels on video or casually flying it into the sky for aerial photos. 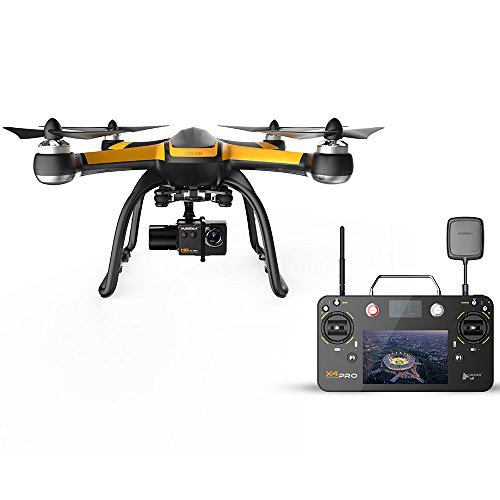 Who is The Hubsan X4 PRO For?

While the H109S X4 is considered to be a high-end drone, experts and newbies can easily operate the drone with little to no problems or confusion. Its commands and controls are rather straightforward so anyone who likes to capture footage of their outdoor adventures at the beach, hiking park, or even a sports occasion will find it simple to use.

This drone in particular is ideal for recording aerial videos and photos due to its 3-axis gimbal that has a broader field of view, automatic rotation, and high-quality straight down shooting which in turn makes for a good angle from a bird's eye view.

If you wish to use the drone for more casual purposes, it has many other features for taking selfies or group photos from the air. Although, if you're looking for a drone that's able to follow you for biking or running videos, this is what the H109S X4 lacks, unfortunately.

Additionally, the drone does have a 1080p resolution camera, but if you're looking for the best resolution possible for more professional looking video quality, drones with a higher price tag offer more HD and 4K resolutions.

Along with the H109S X4 Pro quadcopter itself, it also comes with:

The remote control needs eight 1.5V AA batteries to work, but these aren't included with the drone. The drone's camera doesn't come with a micro SD card, so you'll have to buy one separately in order to save all your data from recording footage and taking photos.

There are no extra replacement blades included, and one of the downsides for the drone is that its parts are rather expensive to replace. You can find the H109S's A propellers here and B propellers here. You can also purchase an extra battery here which is highly recommended for when you're planning to shoot drone footage in several places throughout the day.

The propellers can be easily screwed on by hand so you don't need to worry about getting extra tools to assemble the drone. In certain cases where you're operating the drone in risky winds or if you suddenly lose control, the H109S X4 has a specially designed parachute that deploys when the tilt angle exceeds 80 degrees. This helps to land the drone upside down to protect the camera and the gimbal from getting damaged.

While optional, synthetic oil can aid in making the motors of the drone run more smoothly, giving you a quieter operation and fewer troubles.

Overview of Features For the Hubsan H109S

Because the Hubsan H109S X4 Pro is an FPV explorer drone, its battery gives it a pretty decent flight time and the drone itself has an impressive control range. The powerful 7000mAh Li-Po battery is tucked safely inside the main centerpiece of the drone and gives it over 30 minutes of flight without the camera attached (beating other high-end drones like the DJI Phantom 4).

Its several controls include GPS mode, one-key takeoff/landing, and automatic return and land. GPS mode makes the drone's flight safer and more accurate when hovering. The one-key takeoff and landing feature makes it easier for the drone to take off and land at its current position. The auto-home system controls the drone and signals it to come back to its original takeoff point if you ever lose control or you lose sight of your drone.

As for the control range, the H109S X4's specs state that it can travel as far as 1000 meters with or without FPV. Although, you can go as far as 1600 meters (about a mile) before the drone is forced to turn back. This is a highly impressive range compared to other competitors such as the DJI Phantom drone series.

The H109S 13 MP camera is able to record full 1920 x 1080p resolution aerial footage at 30 frames per second. Additionally, it can capture still photos at an incredibly crisp 4032 x 3024 resolution. The 5.8G FPV real-time video transmission lets you share the footage and photos you capture to the display screen on the remote control anytime.

The H109S X4's 1-axis gimbal only offers a pitch control but not other advanced positions such as yaw or roll. Its 6-axis gyro gives the drone stronger stability and wind resistance for less shaky videos and flying. The remote control FPV transmitter is very responsive, even from a fair distance away from the drone. It's easy to use and isn't too large or heavy, but the material feels a bit cheap and the small 3.7-inch display screen makes it hard to see what your drone sees.

The brushless motors on the H109S X4 give the drone an improved flight performance since brushless motors last longer and don't wear out as easily as brushed motors. More power from the battery is being used for rotational force and less is being wasted as heat.

Considered to be the first of its kind, the Hubsan H109S X4 Pro is compatible with a specialized parachute that helps to reduce the impact of a collision. Drone accidents are common, so if you ever lose control of your drone or it bumps into an object and starts heading towards the ground, the parachute will automatically pop out and soften the landing.

The High Edition is more expensive but doesn't have any huge differences. As mentioned before, the standard edition's gimbal is 1-axis but the High Edition's is 3-axis which means you can control pitch, roll, and yaw.

As for its transmitter, the HE drone comes with an H7000 Smart transmitter which is powered by Android and has a 7-inch integrated display screen compared to the standard version's 3.7-inch screen. It has a native resolution of 1280 x 800p and is powered by a rechargeable 7.4V 5000mAh Li-Po battery.

After you take out the drone from its box, all that needs to be installed is the propellers, battery for the drone, and batteries and antennae for the transmitter. The propellers can be screwed onto the drone's motors by hand so you don't need any kind of tool.

After installing the propellers, be sure that the battery for the drone is fully charged before taking it out on a test flight. Most Hubsan drone batteries come slightly charged from the factory but it's recommended you operate the drone for the first time on a fully charged battery for optimum performance.

To use the remote control, you need to insert eight 1.5V AA batteries and take off any protective slips and nubs. Screw on the 2.4GHz and 5.8GHz FPV antennas for maximum control distance and lastly insert the micro SD card.

To make sure your drone stays in a well-working condition, keep the body of the drone clean and try not to let moisture or dirt inside the motors or near the camera and battery. Drone propellers can get loud over time so it's best to occasionally lubricate your motors for a quieter operation.

A good alternative to the H109S X4 Pro is the DJI Phantom 3 drone. It features 4K UHD video recording with a 3-axis gimbal for stability and better control. It's able to digitally stream live 720p video and record on the internal micro SD card at the same time.

The DJI Pilot app for both IOS and Android lets you view what the drone sees live and lets you control the drone directly. Although it's easy to use for both professionals and newbies, it's designed for more professional drone videographers rather than hobbyists because of its high-quality build, expensive price range, and 4K quality video resolution.

Aerial photographers and sweeping landscape directors can get the most use out of the DJI Phantom 3 with its 23-minute flight time and five-kilometer transmission distance.

If you don't require a high end drone with a gimbal, hubsan also makes a drone called the h501s x4 that is a great option for those on a budget.

Overall, our Hubsan H109S X4 Pro review reveals that the drone can be used by both casual drone users or experts and provides full HD 1920 x 1080p video footage. You can choose between either the standard or High Edition version, although there's little difference between the two.

The remote control is easy to navigate and the commands can be activated with the push of a button for further convenience. Other more expensive drones give you better video and photo quality, but it's a decent drone if you're still wary of making a large investment in drones meant for high-quality cinematics.