Whether you are looking for an affordable beginner camera drone for yourself or your kids or you’re an intermediate or advanced drone pilot, the Altair AA108 quadcopter camera drone has features for pilots of all skill levels that make it worthy of your serious consideration. Introduced in 2017, the AA108 offers a familiar dual joystick controller with a holder for your cell phone so that you can view the live First Person View (FPV) video transmitted by the drone. In VR Mode, the drone transmits its First Person View to a VR headset. It also has settings for beginning, intermediate, and advanced drone pilots. This Altair drone comes with a 120° HD 720p camera that captures still photos as well as video, and it creates its own Wi-Fi hotspot.

The Altair AA108 – a Camera Drone Your Skills Won’t Outgrow

With one-button take-off and landing, altitude hold, headless mode, a beginner-level control setting, and joystick controls, this is an easy drone for beginners to learn to fly. It’s made of durable plastic that withstands crashes, so while this drone is best flown outdoors, beginners can learn to fly it inside without having to deal with weather-related complications like a sudden breeze.

Intermediate and advance pilots will appreciate having 8 to 10 minutes of flight time per battery, a flight range of 328 feet (100 meters), the camera’s 120° wide-angle First-Person View, the ability to create custom flight paths, the low battery and out of range alarms, and the emergency landing capability.

If you are looking for a drone that produces video that you can show on a wide screen TV, you will be happier with a drone with a full HD 1080p camera or a drone that allows you to use your sports action cam.

This drone also is not the right choice if you are looking for a competition drone to race or to fly on obstacle courses. Smaller drones made for indoor flight are better for those uses, especially if they can be modified to increase their speed or maneuverability.

A Look Inside the Box

Inside the box, you’ll find the Altair AA108, a detailed owner’s manual covering all of the features and how to remove and replace damaged propellers, two batteries for the drone, the dual joystick controller, a USB charger, four extra propellers, four extra feet for the bottom of the drone, a template that fits over the top of the controller with labels that explain the controls, a card reader, and a tool kit for replacing damaged propellers that includes a propeller removal tool. As this YouTube video, entitled The BEST BEGINNER drone – Altair AA108 from Tech Force shows, the drone comes out of the box fully assembled. All you need to do is insert the batteries in the drone and the controller, and you can start flying. 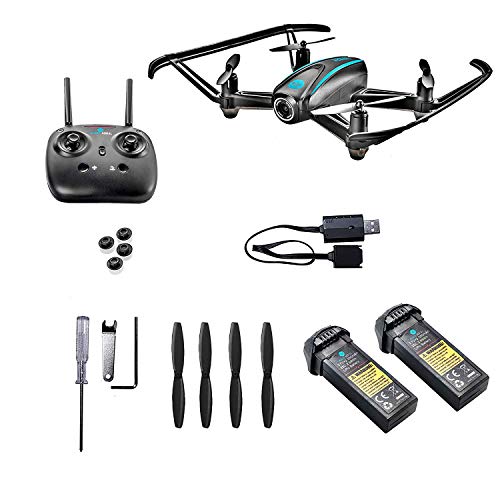 Summary of the Features of the Altair AA108 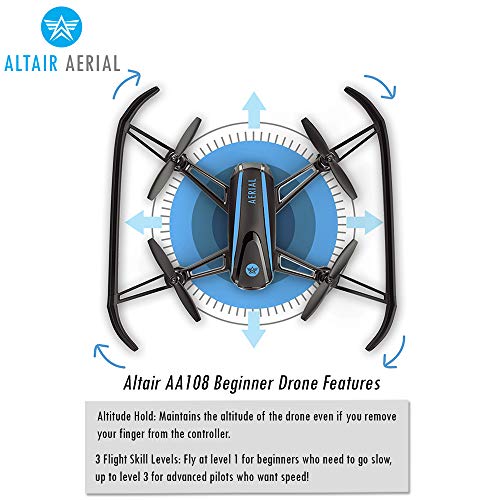 Features for All AA108 Pilots

Specs for the Altair AA108

Flight Controls for the Altair AA108 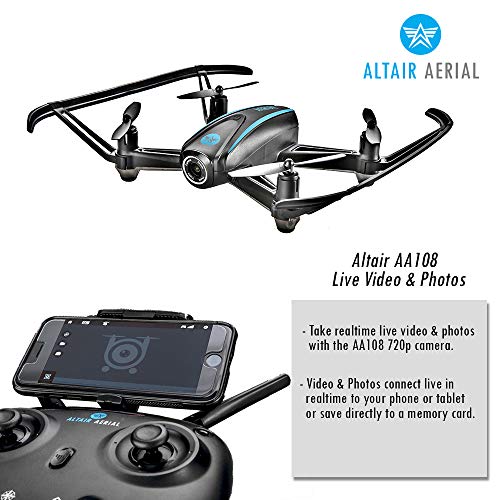 Features for Those Learning to Fly

One-button take off and landing eliminates the need for those just learning to maneuver a drone to control the drone’s speed, height, and orientation while launching or landing the drone. Just push the button, and the drone automatically maintains a stable air position and lower speed while increasing or decreasing its altitude.

Altitude Hold is the equivalent of a panic button for new drone pilots. After the drone automatically lifts off, whenever the drone appears about to get into trouble, or when you don’t know what to do or which way to tell the drone to fly, using altitude hold causes the drone to hold its altitude and wait for further instructions. While the drone hovers and stays out of trouble, you have the chance to pause and think.

Heading Hold Mode or Headless Mode makes it easier for beginning pilots to control the direction the drone flies. When you launch your drone or put it into Heading Hold Mode, you should make sure that the camera is pointing away from you.

You can use the controls to enter and exit Head Holding Mode at any time while flying your drone.

Other Flight Controls on the Altair AA108

In Normal Flight Mode, the drone interprets commands to fly forward, back, right, and left based on the direction the camera is pointing. The colors of the LED lights on the drone also differentiate the front and rear of the drone.

Mid-Level Speed Flight Mode is useful for more skilled drone pilots who are flying the drone outdoors in a breeze.

High Speed Flight Mode is for use by advanced level pilots who are flying the drone outdoors in an open space and who want to perform aerial tricks with the drone.

Custom Flight Mode lets you draw a flight path on your smart phone or tablet for your drone to follow.

Emergency Landing mode when the drone loses contact with the controller or when the battery runs low, it can land itself at its current location. However, since this drone lacks GPS, it lacks the means to return to the location from which it was launched before landing.

Emergency Stop is, literally, only to be used as a last resort in an emergency situation. Pressing and holding the one-button landing control for 1 second immediately stops the propellers. This means that you have no control over the drone, and the drone has nothing supplying lift and propulsion. It will immediately fall out of the air over the area where it is located and crash.

What Do the Alarms Mean?

The Low Battery Alarmlets you know that the drone’s battery is running low on power. The controller will beep twice. You should land the drone as soon as possible and change the battery to keep the drone from crashing or from flying away out of control because the battery is too low to enable the drone to receive the signal from the controller.

The Out of Range Alarm is a series of three beeps that signal that the drone is about to fly out of the range of the signal from the controller. If the drone does fly out of range, it will keep flying in its current direction with no guidance until it crashes. When you hear this alarm, you need to fly the drone back into range quickly to prevent losing control of it.

The Altair AA108 does not receive GPS, so it lacks features that depend on GPS, such as the ability to automatically return home to the place from which it was launched if, for example, it loses the signal from the controller or its battery is running low. You also cannot define the drone’s flight path using GPS waypoints or use GPS fencing to restrict the drone’s flight to a particular area. It is especially important to keep drones that lack GPS within the signal range of the controller to avoid losing control of the drone.

Follow Me Mode commands the drone to follow the signal at a safe distance so that the drone follows you and films what you are doing live.

Also, as already mentioned, the AA108 captures video at a resolution of 720p. Although video with a resolution of 1080p has become the standard for YouTube, video shot at a resolution of 720p can be used on YouTube and the internet. The smaller size files for videos shot at 720p actually are a great size for sharing via email. These files upload, download, and open quickly. Videos shot at 720p also will look fine on computer monitors and small to standard size TV screens. However, they will look grainy on a wide screen TV. If you plan on showing your videos on a wide screen or 4K television, you should look for a drone with a higher resolution camera or one that carries the camera on a gimbal platform so that you can use your own camera.

The Altair AA108 Versus the Altair Outlaw

Like the Altair AA108, the Altair Outlaw includes the features that make it easy for beginning pilots to learn to fly. However, the camera on the Outlaw captures video at a resolution of 1080p and stills at a resolution of 1920p x 1080p. In addition, the Outlaw is a GPS drone with Return to Home and Follow Me. You can signal the drone to return to home using the controller, but if the drone loses the signal from the controller or if the battery runs low, it automatically returns to the location from which it was launched as long as you have not turned off the GPS. The GPS also allows you to control the flight path of the drone by setting GPS waypoints along its route. You can even have the Outlaw fly in a circle around you or around a point of interest that you select via GPS while filming or taking photographs.

Pairing the AA108 With the Controller

This review of the Altair AA108 from Blue Collar Reviews, which is entitled Altair Arial AA108 Review demonstrates how to attach the batteries to the charger and how to pair the drone with the controller. It also discusses some of the drone’s features and some of the features offered by the app.

If your Altair AA108 tilts or turns to the right or left when launching or hovering, this YouTube Video from Altair Arial entitled Instructions for Altair AA108 Trim Procedures explain how to correct the drone’s flight so that it remains in a stable position.

Altitude Hold isn’t useful only for beginning drone pilots. It’s also useful when filming. Fly the drone to the altitude and position from which you want to film, and then let it hover there. To create a different look for your shot, you can tilt the drone forward, backward, right, or left while the drone holds its altitude.

The Altair AA108 lets you get started with filming right away, and it’s not a drone that you will outgrow as your piloting skills improve. With care, you can fly this drone indoors or outdoors. If your plan is to share your videos on YouTube or other social media or if you plan to email them to your family and friends, then the HD 720p camera on the AA108 is well-suited to your needs. You should consider this drone.